With fans around the world glued to the current F1 season, it is a good time to look at some interesting facts about the sport.

Every car must carry its driver’s race number. The driver’s number will be used throughout his career, with the exception being the reigning world champion. This driver can opt to carry number one, which he inevitably does!

The sport is open to men and women, although the latter are under-represented. Maria Teresa de Filippis was the first woman to compete in F1 in 1958, while Lella Lombardi is the only woman to score championship points. She received half a point for finishing sixth in the accident-curtailed Spanish Gran Prix in 1975, driving for March/Williams. 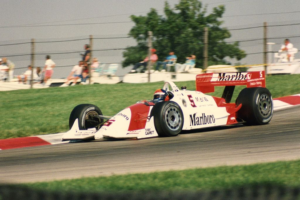 Albert Park in Melbourne inflicts the heaviest G-force on the drivers, pulling over 6G through turns one and 11.

An F1 driver loses an average of 6.5lb during a race.

Sebastian Vettel narrowly pipped Lewis Hamilton as the youngest champion in 2010, with the Brit claiming the honour from Fernando Alonso in 2008.

Dutchman Max Verstappen, at 18 years 228 days, is the youngest race winner in F1 history. He was two years 210 days younger than the previous record holder, Sebastian Vettel. Verstappen took the flag at the Spanish GP in 2016 days after switching from Torro Rosso to Red Bull.

Tyres make the headlines in races and reach remarkable temperatures, meaning that the drivers must manage them. An average road car tyre typically has a life of 16,000 kilometres; however, the current Formula 1 tyres are designed to last for anything between 60 and 120 kilometres.

The Williams team changed all four tyres of Felipe Massa’s car at the European Grand Prix 2016 in 1.92 seconds. The fastest time to change four wheels on a road car is 58.43 seconds, according to the Guinness Book of Records.

The first-ever F1 race was held at Silverstone in 1950, although the first Grand Prix is generally recognised as the 1906 race at Le Mans organised by Automobile Club de France.